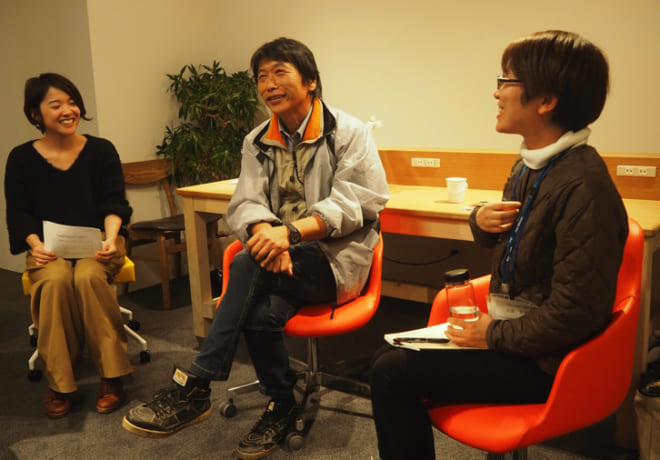 [People who challenge] Two people who practice "organic farming" in Aso had a talk!

Hello, this is the future manufacturing base MOG. 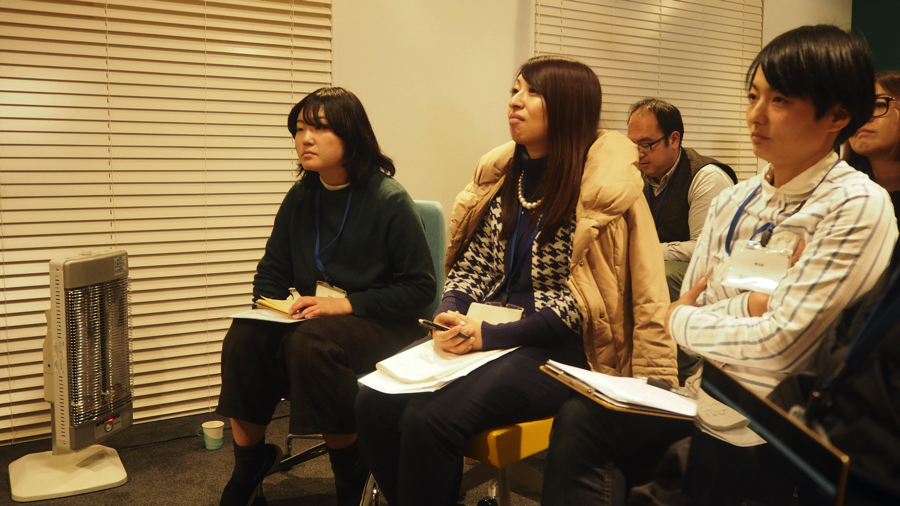 A conversation held as part of the program to listen to the live voices of "challengers" in the Aso area. The two narrators, who are active in the agricultural field of Aso, came to us. 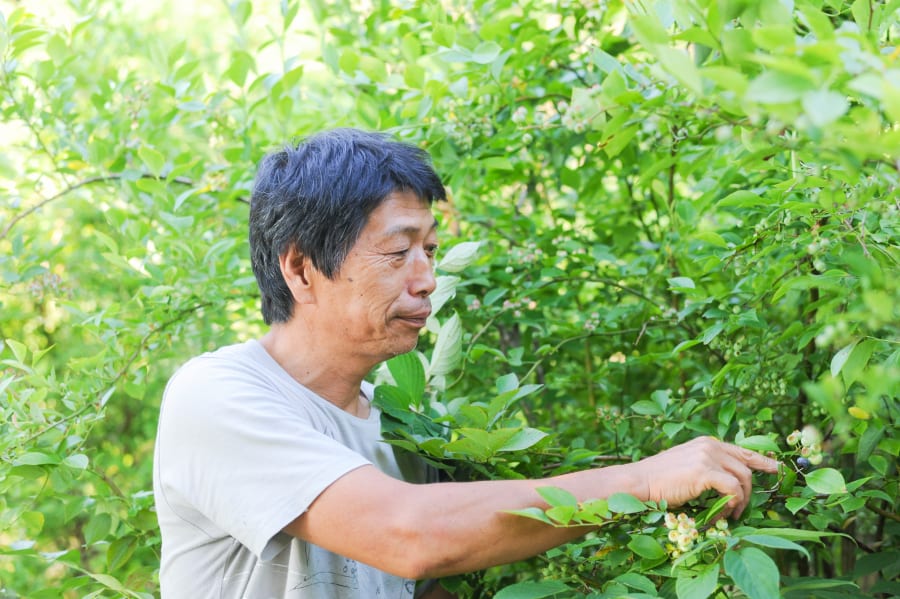 Shimeichi Umeki (moan)
Born in 34. In order to convey the goodness of the southern small country to those who seek the nature of Aso, succeeding the farmer who is a family business, switching from `` conventional cultivation '' to `` natural cultivation '' of pesticide-free, chemical-free fertilizer and no weeding Then, in 2, the tourist farm “Appurminto Herb Farm” and the natural food restaurant “Kaze no Mori” were opened. As a practitioner of "environmental conservation-type agriculture", it has widely accepted not only tourists but also agricultural trainees from all over the country. 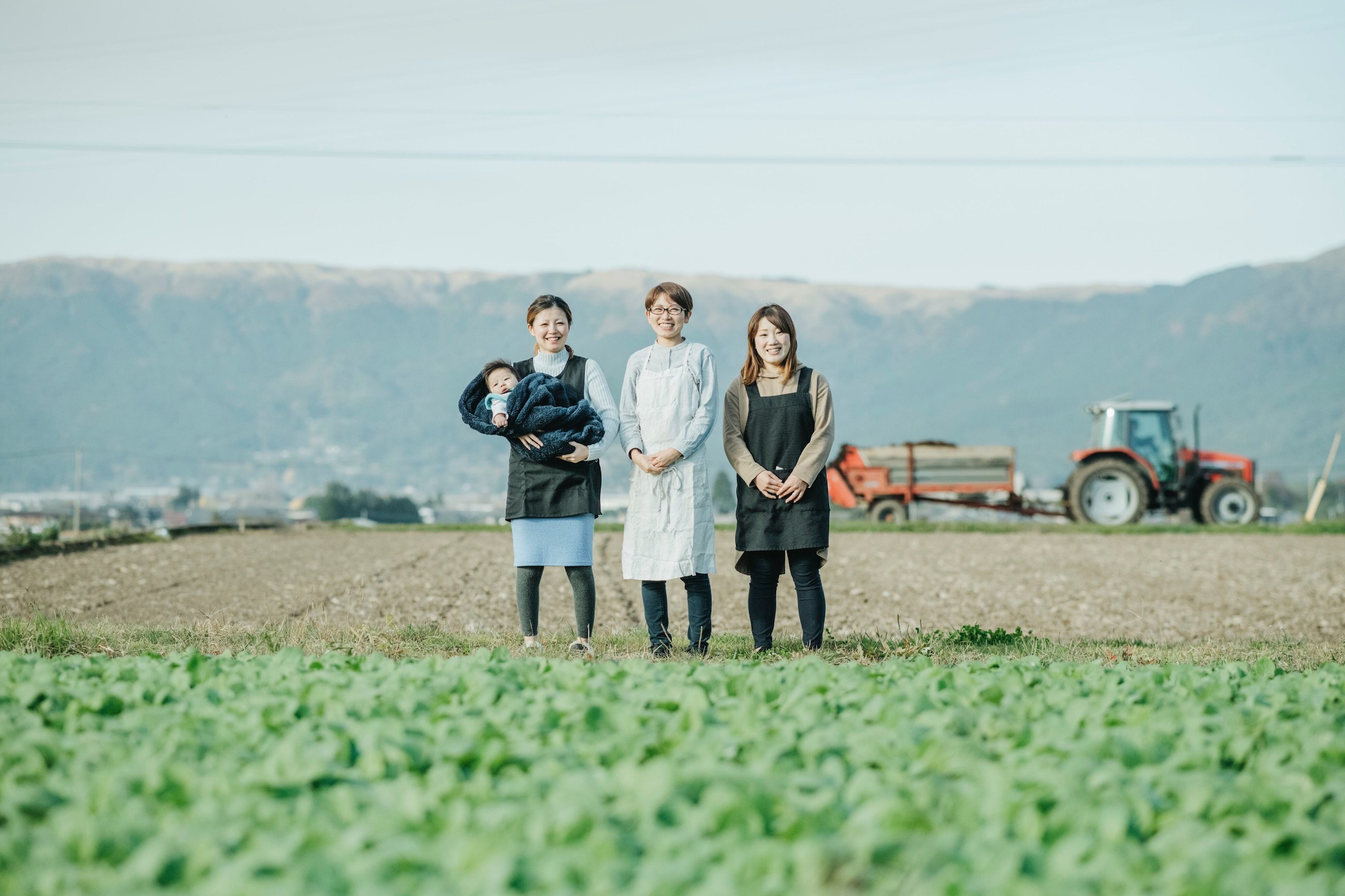 Chika Sato
Graduated from Kumamoto Technical High School in 2006. After studying at a design school in Kansai, he joined STUDIO SIGN. After leaving the company in 2012, made a U-turn to Kumamoto and Aso. New farming after a year of agricultural training at Appurmin and Herb Farm. In 1, Aso Sato Farm was established. The company produces and sells the hit product "Aso Takanard", which sells 2014 pieces annually only in the Kyushu area.

You learned agriculture know-how as trainee under Umeki for one year before you started new farming. I would like to ask the two teachers about their journey to farming and their current style. 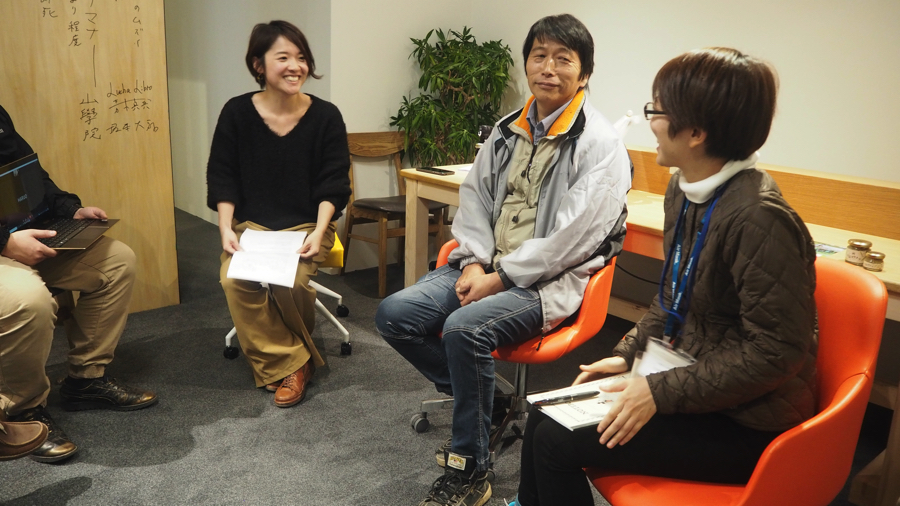 How did you make a U-turn?

MOG>
At first we ask Mr. Sato. After graduating from a vocational school in Kansai, worked for four years as a product designer who designs and designs industrial products, and then made a U-turn to Aso. Why leave the company and make a U-turn? 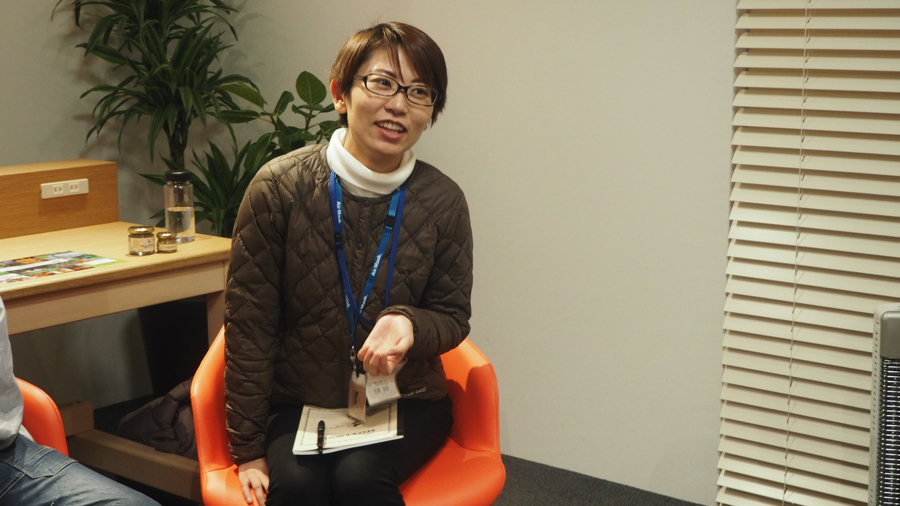 Sato>
Originally, grandfather and grandmother were farmers, and in the fourth year of working, there was a Tohoku earthquake, and soon after that there was a heavy rain disaster in northern Kyushu. We did not have any direct damage, but we heard many voices saying that the nearby area was flooded and the hometown of Aso was hard. I loved making things and I also loved Aso, so I returned to Aso thinking that I might be able to do what I could.

MOG>
At that time, did you come back to do farming?

Sato>
I agree. My parents were not full-time farmers, but my father was trying to maintain the grandparents' rice paddies. However, when I was 20, my father died and no one succeeded. Then, during the Tohoku earthquake and the Kyushu heavy rain disaster, when I was searching for what I could do, the word "agricultural girl" came out to the world. There was a woman called “Yamagata Girls Farm” who was farming alone, so I visited there and decided that even women could do agriculture depending on the way she decided to return to Aso.

MOG>
With that background, you decided to return to Aso and start agriculture. Then, I was trained at Umeki for one year. How did you decide on your training destination? 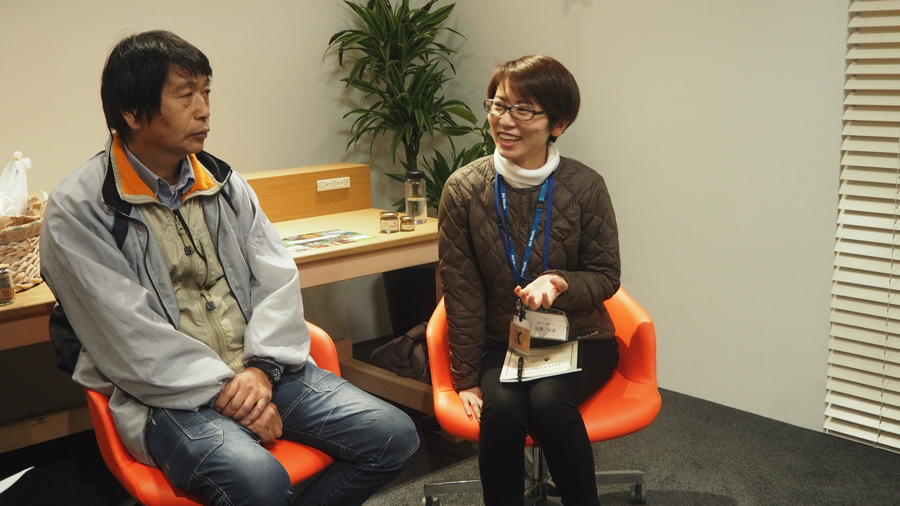 Sato>
First of all, because the field was agriculture, even if I went to a completely different area, the climate and circumstances were different, so I looked for it in Aso near my house. Then, when I realized that I wanted to do organic farming, Umeki-san accepted me, and asked Umeki-san.

MOG>
At Umeki-san, do you accept agricultural training at any time? 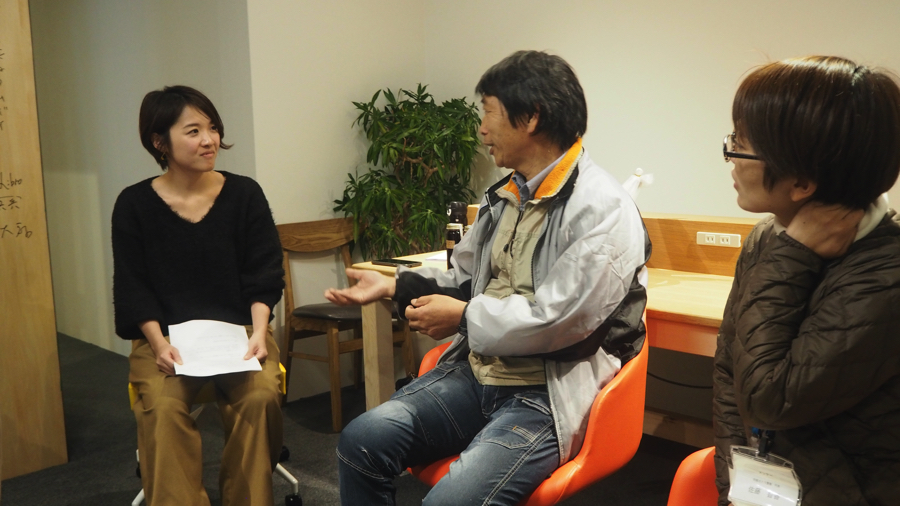 Umeki>
This is Chika's fifth person. Before that, I accepted woofs and foreigners. Currently we accept one person. The trainees are all in different situations and periods.

MOG>
How do you know the recruitment of agricultural training acceptance?

Umeki>
The Kumamoto Organic Agricultural Research Group has been mediating the training. I'm a member too, so I'm going to introduce me through that and decide on an interview.

MOG>
Umeki-san produces organic crops, but they produce them as processed products, and they also run restaurants. Is such a style (composite type) a so-called "ordinary farmer" style?

Umeki>
Ordinary farmers produce only one large-scale crop, such as tomatoes for tomatoes and cucumbers for cucumbers, and ship them to the market. And it is common to use pesticides and chemical fertilizers, and about 10% of farmers use this style. Among them, it is said that less than 150% make or process using no pesticides or natural farming. Currently, there are about 0.05 million farmers nationwide, but no XNUMX farmers are doing organic farming. In terms of ratio, it is about XNUMX% nationwide. In addition, farmers who do processed goods and restaurants may be very rare.

MOG>
Looking at Umeki-san's personality, I have the impression that I don't think it's so special, but why did you decide to do this? 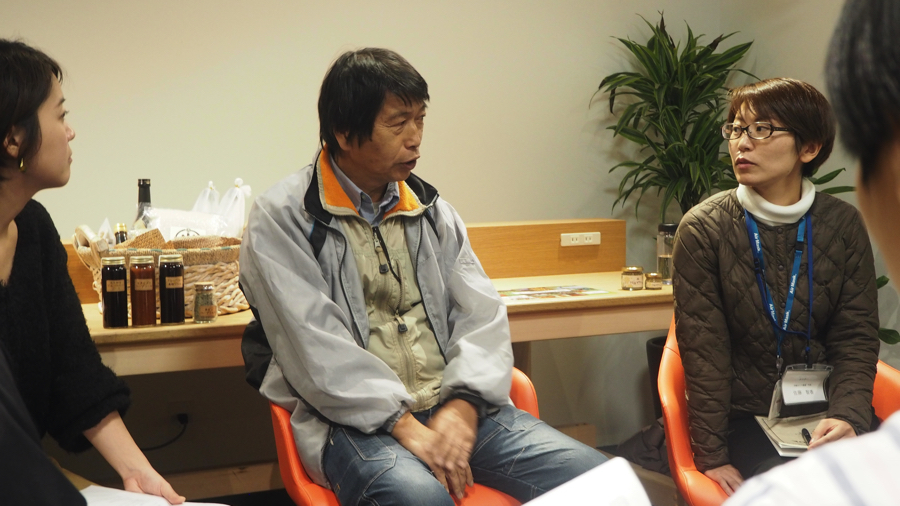 Umeki>
I really wanted to be a normal farmer (laughs). We shipped to the market several times, but there was a reality that it was difficult to make money without the quantity. Furthermore, while working in the farm (since farm equipment is expensive), the repayment of debts is likely to be completed for a lifetime, and even if it is shipped to the market, the other side will decide the amount, so you have to give up even a small amount was. From that point on, I came to want to price my own crops myself.

MOG>
So what action did you take?

Umeki>
At first, I went to the morning market of Kurokawa Onsen. But if the vegetables are unsold, then that's it. You have to dispose of it. At that time, I saw young children (such as trainees), such as trainees, making cookies and bread and opening stores together, and I thought these children would not make much money in a short time (Laughs)

We did some processed products, but at best we made buns and dried shiitake mushrooms. I thought it would be no use as it was, and it was natural to learn from those young people, but I also tried to do it if I could. Organic farming is one of them.

So, it's embarrassing, but it didn't mean that I had a sense of mission in organic farming or that my child was sick.

■ From agriculture to restaurant management

MOG>
How was the mechanism for people to come together as a “tourist farm”? 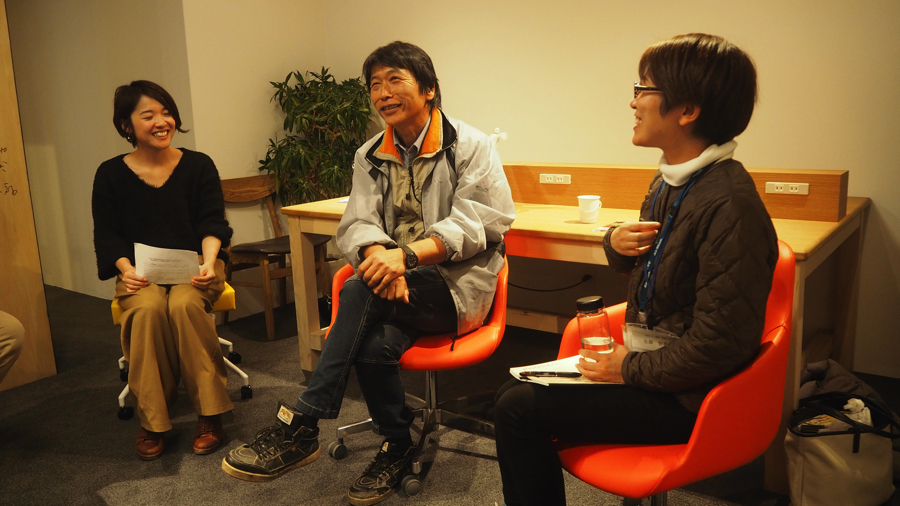 Umeki>
Minamioguni-cho is unique, and there are many farmers who start their business. Like a soba shop while doing a farmhouse. And they never build a shop on the road. I make soba noodles and the deep mountains. Young people are willing to search for such places.

At home, there's a spot in the amazing mountain (laughs).

The road was bad, and you can't come here I made it in a place like At that time, I was also planting apple trees. It was rare to plant apples in Kyushu, so more people came from far away.

I also grew herbs. I didn't know anything about herbs at first, but when I planted it, the number of people who came to visit it increased, and on the contrary, I learned a lot from customers. The restaurant was also opened, in response to requests from customers, saying, "If you come here, you will be hungry." 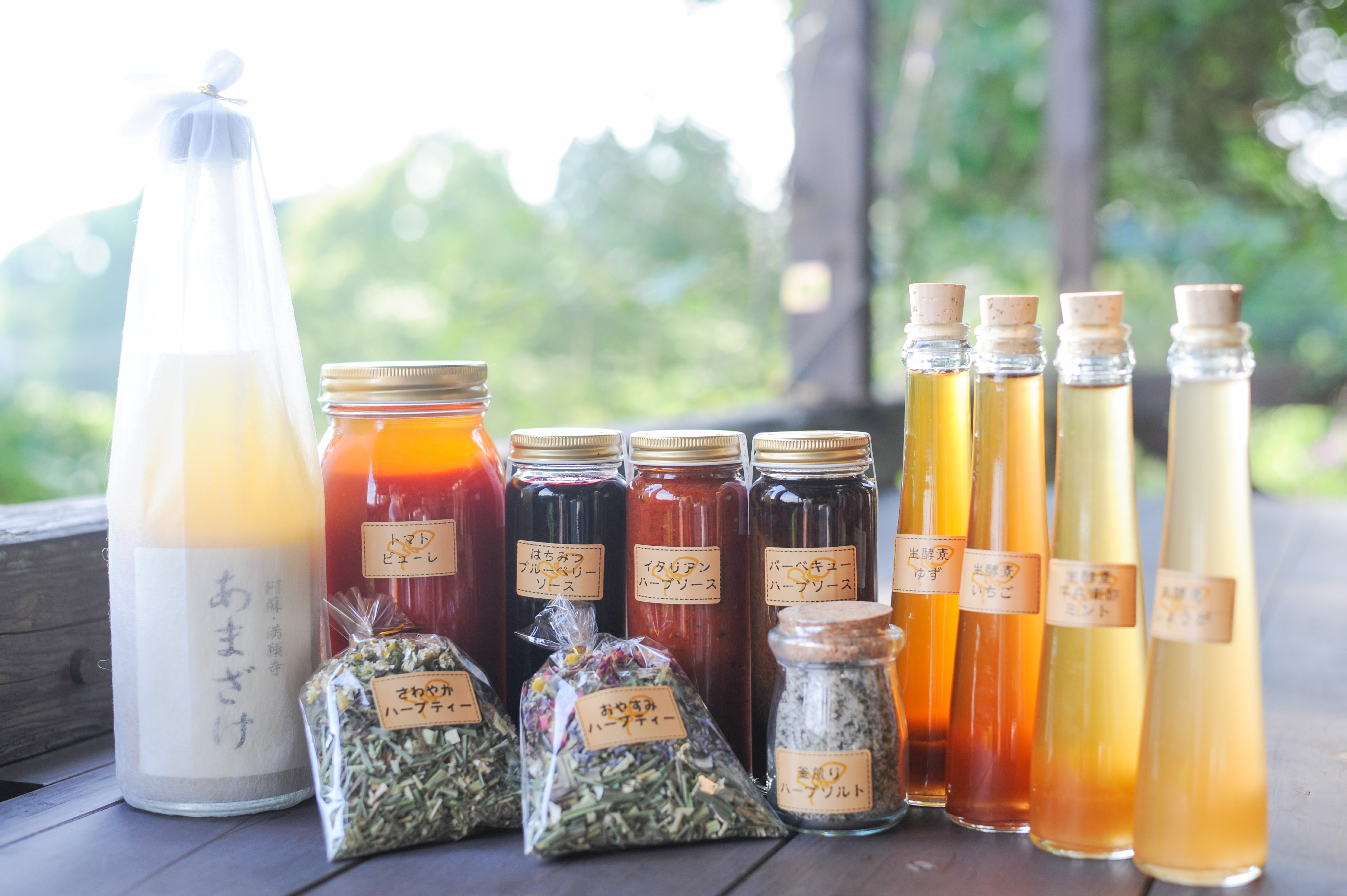 > Next Page: From training to establishment of "Aso Sato Farm"

A must-see for cafe! Cafe No. X NUMX I want you to take on a date! Founder of Aso / Minamikosoku Introduction of long-established cafe "Apple Tree" of 1 year.
November Kaji-chan