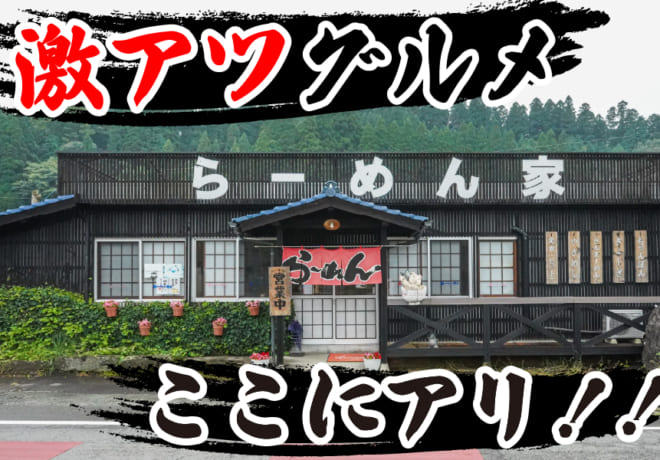 What is the rare gourmet "sanma-men" made by the owner of ramen for 40 years? ??Introducing the "Fukuichi Ramen Oguni Store", a collection of discerning Achiachi gourmet foods that can only be eaten here!

Hello everyone! I'm Junji from the SMOMO editorial department. 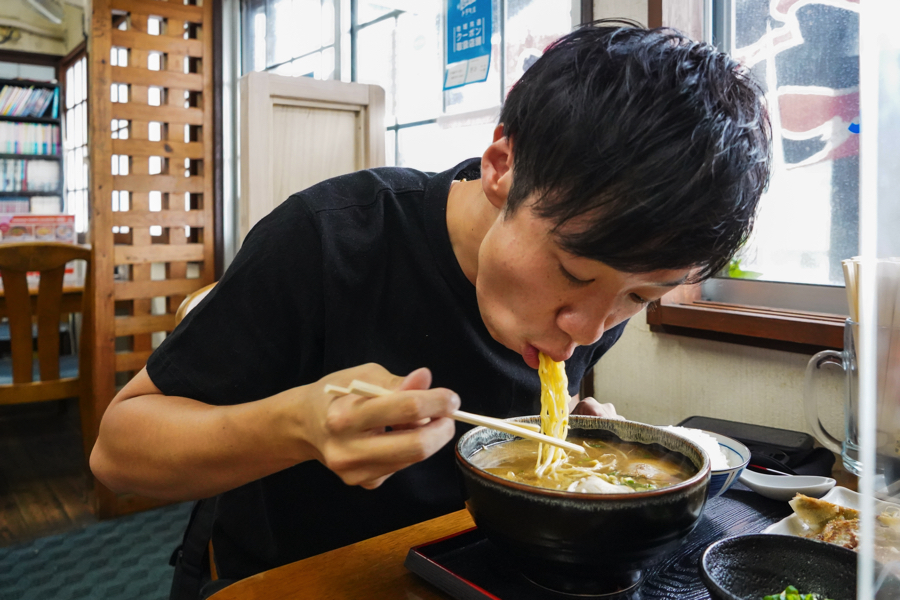 In Minamioguni Town these days, it has become commonplace for the temperature in the early morning to be in the single digit range.
Although it's almost December, until the other day, the autumn leaves should have been in full bloom and it should have been a warm and cheerful autumn.

However, in Minamioguni-cho, autumn ends in an instant and it is really winter.It's too cold!

I used to wear shorts even in winter when I was in elementary school (the one who is definitely in the class)
I was proud that it was strong against the cold.

It was a misunderstanding.

If you can time leap when you are in elementary school, wear it first.Long trousers.

… The introduction has become longer

What I want to warm my body in such a cold time"Hot gourmet"it might be?
So this time, we will gather recommended hot gourmet foods in Minamioguni Town."Fukuichi Ramen Oguni Store"Introduce!

I will go so that it will be sucked in like hot ramen.Fukuichi Ramen.

■ The owner has been ramen for over 40 years!Fukuichi Ramen / Oguni store

Fukuichi Ramen is located along National Highway 212, and is easily accessible, 2 minutes by car, 5 minutes on foot, and 3 minutes on the road from Kiyora Casa, a general product building in the center of the town! 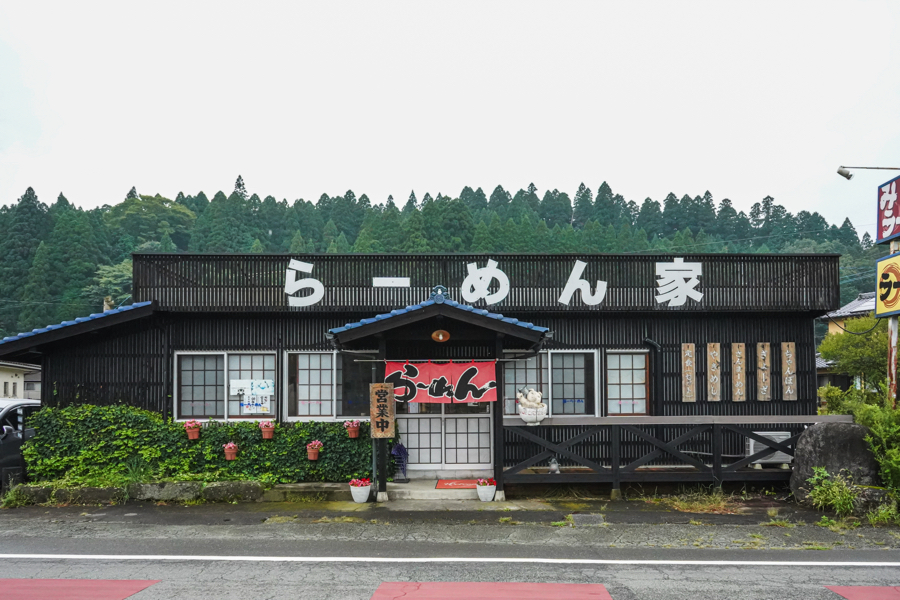 If you say it in a modern way, the "Ramen House" is marked on the "Japanese Modern" building, so you can easily find it! 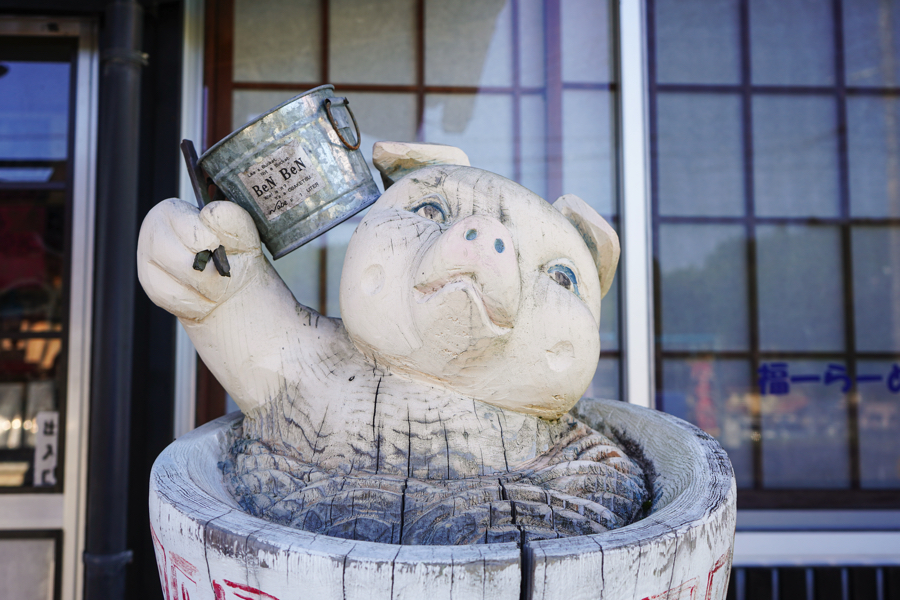 At the entrance of the store, there is a cute pig object familiar to Minamioguni townspeople.It's the same as I saw when I was little. 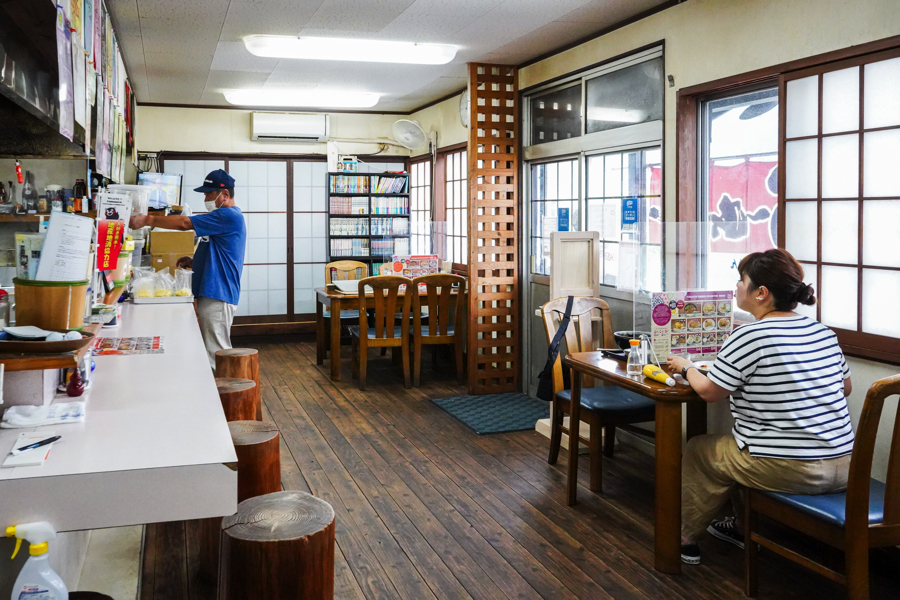 There are 5 to 6 counter seats and 4 table seats in the store. (Oh, the editor-in-chief of Glutton is already sitting 😇) 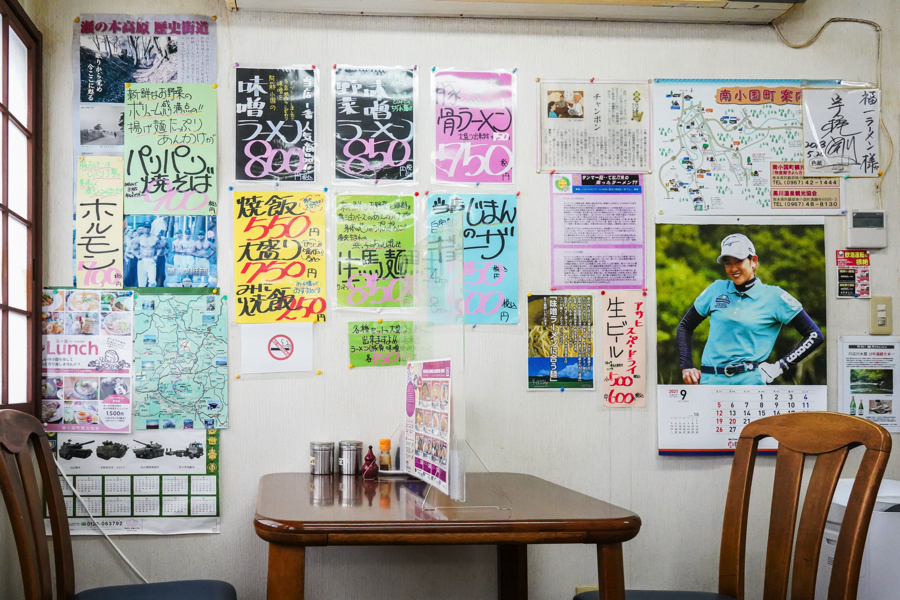 Handwritten menu tables are posted everywhere on the wall.
All of them are reasonably priced and attractive menus ...I'm indecisive, so it will take about an hour to decide. 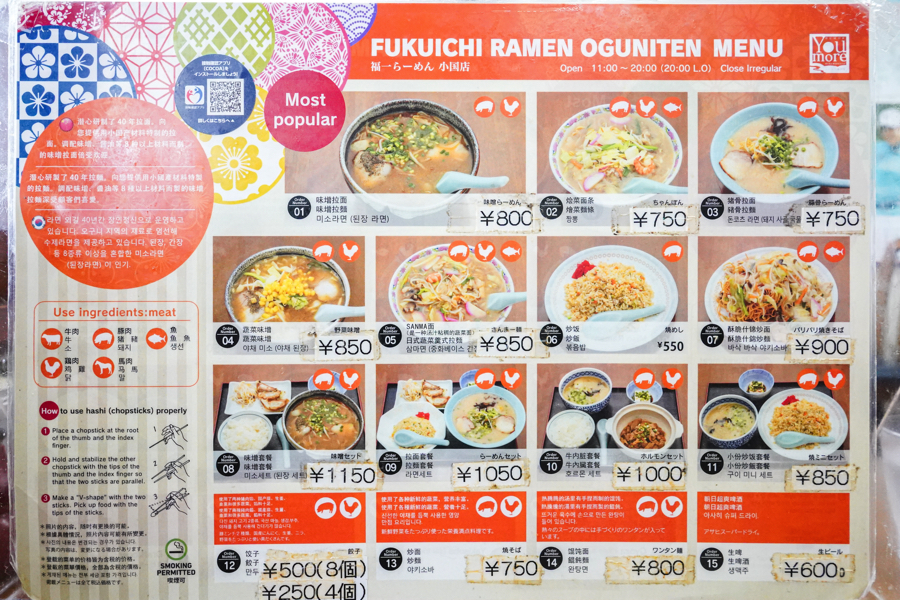 The table has a menu table with pictures.What a perfect multilingual support!
Looking at the pictures, I'm at a loss. 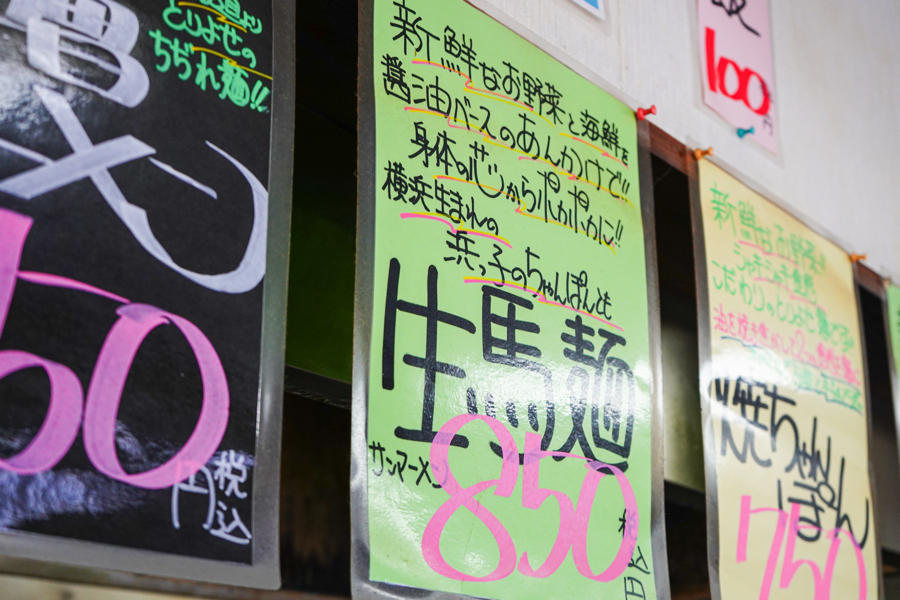 As a result of continuing to get lost, here is the menu that I noticed ...
Raw horse noodles (sanma-men)

■ What is Sanma-men?
Before the war, sanma-men was a meal served by cooks, and it is said that thickened meat soba is the prototype.
It is said to have originated from a Chinese restaurant in Yokohama City, Kanagawa Prefecture, and has a history of more than 60 years.
Basically, soy sauce-based soup with meat, bean sprouts, Chinese cabbage, and seasonal vegetables.
Warm ankake is perfect for the cold seasonThen, when you eat it, you will feel more energetic, so it has been gradually commercialized and is now available in stores.

So that's it··! ??
The Cantonese word "raw = saury" is not an autumn sword fish, but the texture of fresh crispy vegetables. "Horse = Ma" means to put it on top.
It is said that the combination of these two words is raw horse noodles (sanma-men).
One more smarter ⤴︎

It originated from a Chinese restaurant in Yokohama, Kanagawa Prefecture.This is the reason why it is called "Yokohama-born Hamakko Champon"!Are you an urban child! ??

in any case,Warm from the core of the bodyBecoming is perfect for me now! 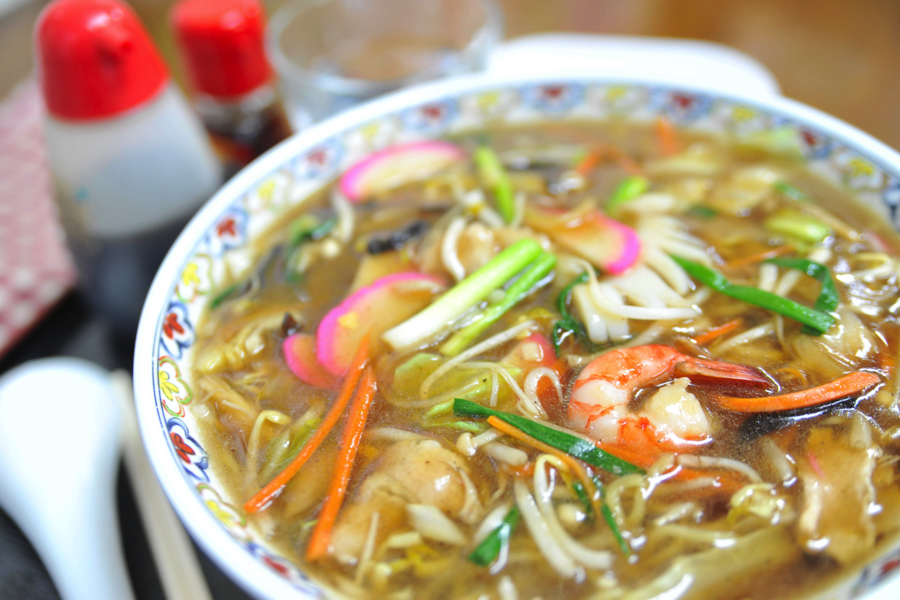 Nice to meet you, Sanmamen.
Plenty of vegetable bean sprouts, carrots, garlic chives and other vegetables are poured out of the bowl!
Even seafood such as shrimp.This is a luxury with full volume!I'll enjoy having this! 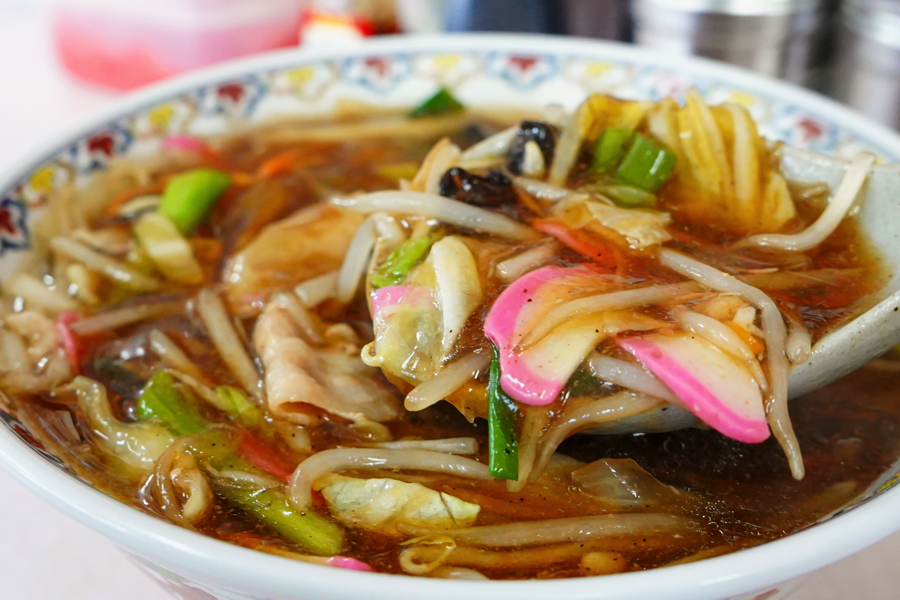 Ingredients were carefully selected by the ownerMorning vegetables from OguniUse plenty.
The depth of taste that the fresh crispy texture and the abundance of ingredients play is already the best! 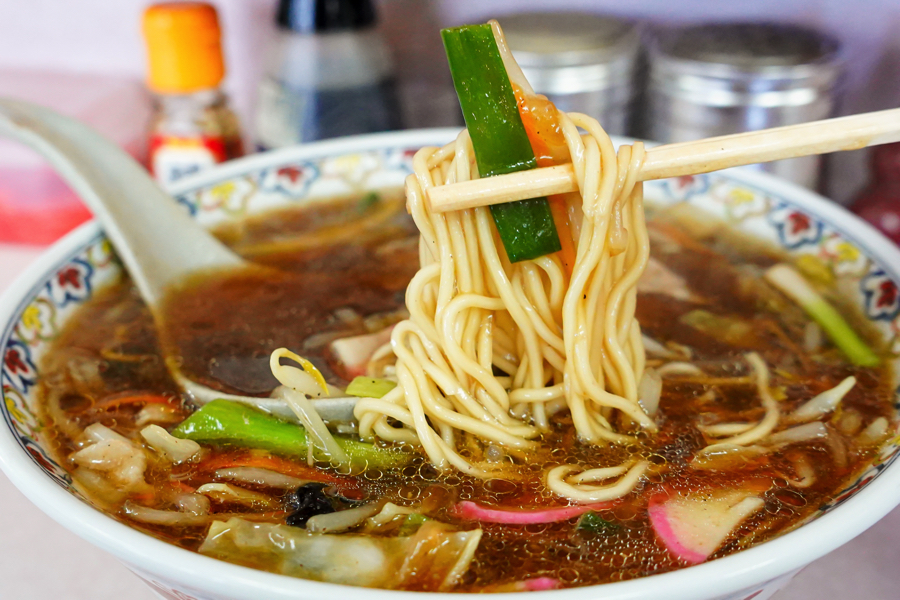 The soy sauce-based hot noodles are entwined with the thin noodles!
It's as entwined as a wired earphone pulled out from the bottom of the bag! !! 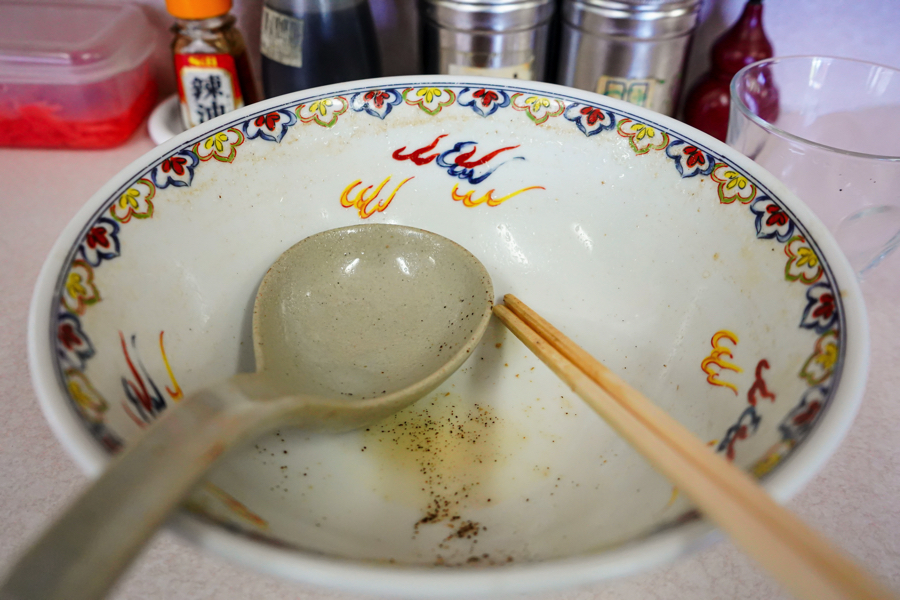 Because it ’s delicious! !!

It was the best cup I couldn't help but drink the soup with the taste of seafood and vegetables on the meat.
By the time I finished eating, I was sweating about the first set of saunas. (true)
The editor-in-chief said that if you sweat, you have 0 calories ⤴︎!

You can eat the rare gourmet "Sanma-men" in Oguni.Only "Fukuichi Ramen Oguni store"!
Please try it when you visit for leisure such as a drive!
Hamakko's Champon is not Date! 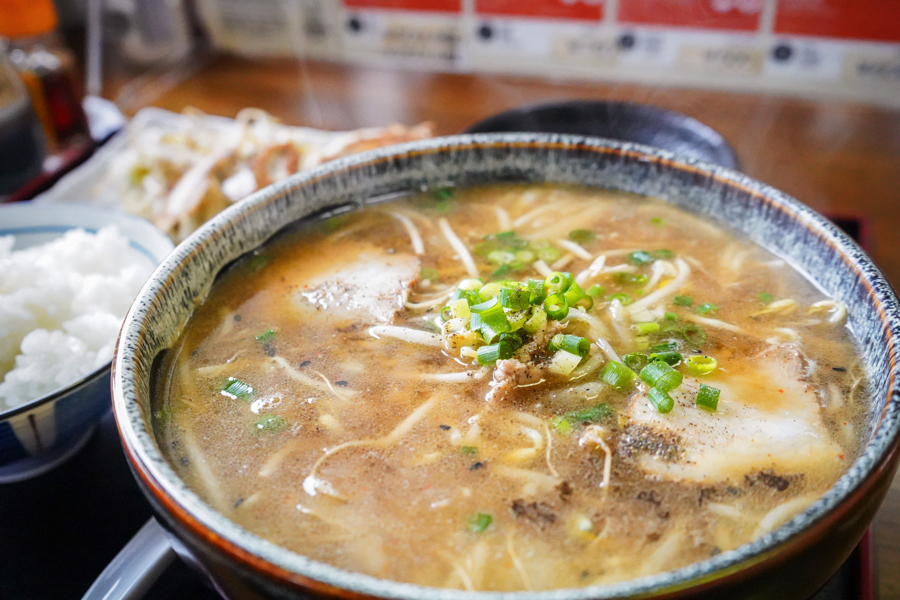 ■ Miso Ramen 800 yen (tax included)
Fukuichi Ramen Oguni store,No.1 in popularityMiso ramen.
The special soup, which is a unique blend of miso procured in Oguni, is addictive!
Half of the visitors order this miso ramen.
The secret ingredient is vinegar, which has a sweating effect, and warms your body while you are eating!
(A large serving is also possible for +150 yen!) 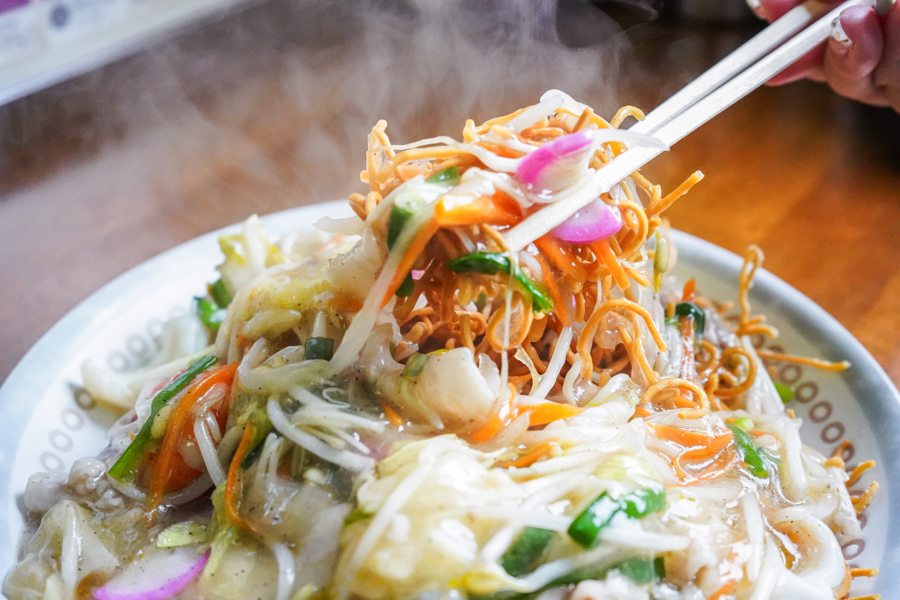 ■ Crispy yakisoba 900 yen (tax included)
Crispy fried noodles with hot sauce full of vegetables.
How to make carefully selected thick raw noodlesIt is said that it is ordered from Hokkaido.
It's already crispy because it's fried in the shop!
A slightly spicy taste for a cold body"This one's excellent!" 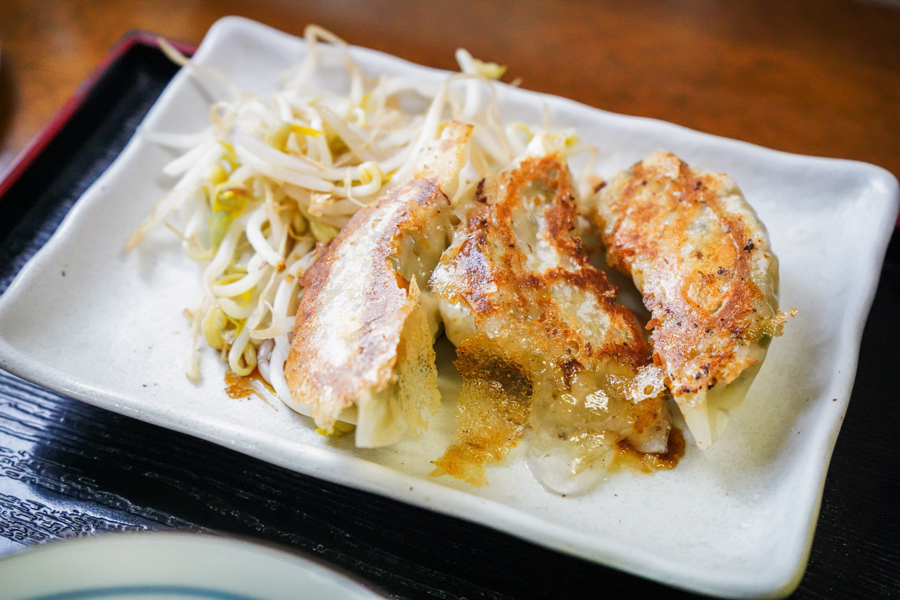 ■ Handmade dumplings 4 pieces 250 yen / 8 pieces 500 yen (tax included)
I want another item!At such times, the classic dumplings.
The taste of meat is firmly wrapped in the homemade dumplings.

How was "Fukuichi Ramen Oguni Store"?
Every menu is filled with the feelings of the owner who is particular about each ingredient, and it was delicious that you will want to go there again and again!

Let's eat the hot gourmet of Fukuichi Ramen, put on long pants, and get over this cold! !!
Overcome the La Niña phenomenon!

Everyone loves Oguni-go ramen special feature! !!Delicious and full!Introducing ramen acclaimed by the locals and an excellent menu of unusual kinds at once!
2021/10/6 SMOMO editorial department

[Latest version] New in this winter! An exquisite winter gourmet 2019 from Aso and Minamioguni, where you can enjoy the taste of the season!
2019/12/5 Kaji-chan

[Winter Gourmand 2021] If you want to taste the taste of the season, go to Aso Minamioguni!Introducing the best recommended "exquisite gourmet" this winter at once! (Limited novelty gift information available)