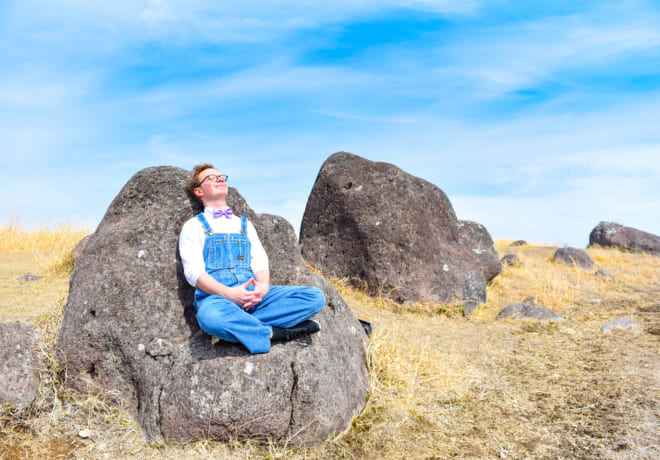 [Challenges] Interview with Mr. Walmax, a Swedish who drowns in Aso and Minamioguni

Hello, this is the future manufacturing base MOG!
2019 year of 5, “Future Creation Center MOG” opened in Minamioguni-machi. 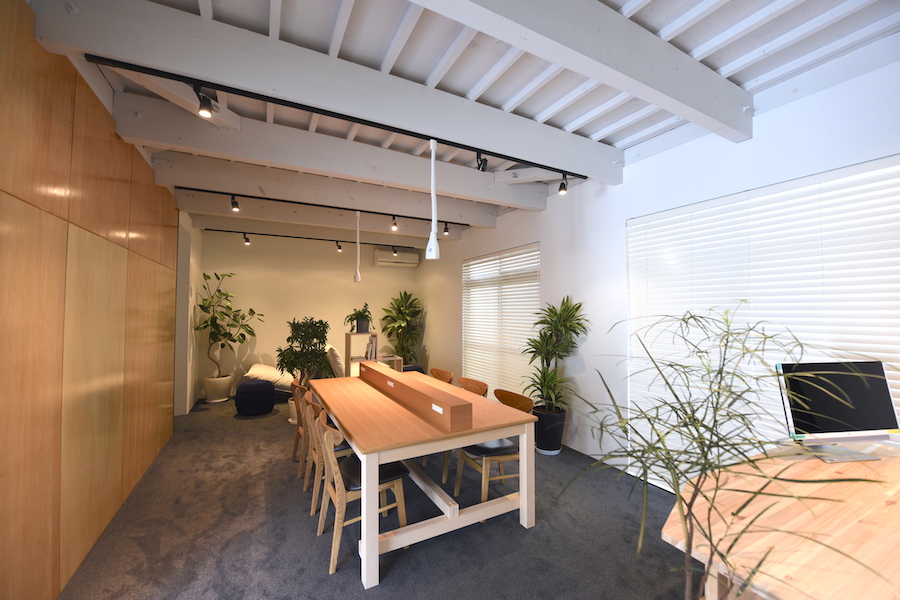 This is not only a “place for fostering challenges to create the future”, but also a coworking space where people from various regions gather to share the work space together with “Co” = ”. 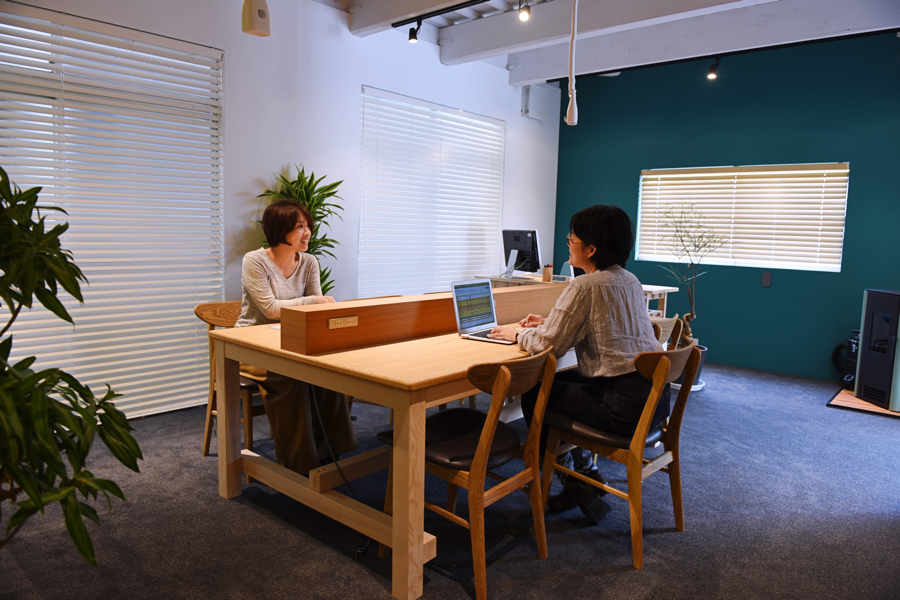 In such a MOG, we will introduce people who are trying to fulfill their wishes in the area as a series of “people who challenge naturally”!

The first is this person who would have seen somewhere once in Minamioguni-machi. Max! 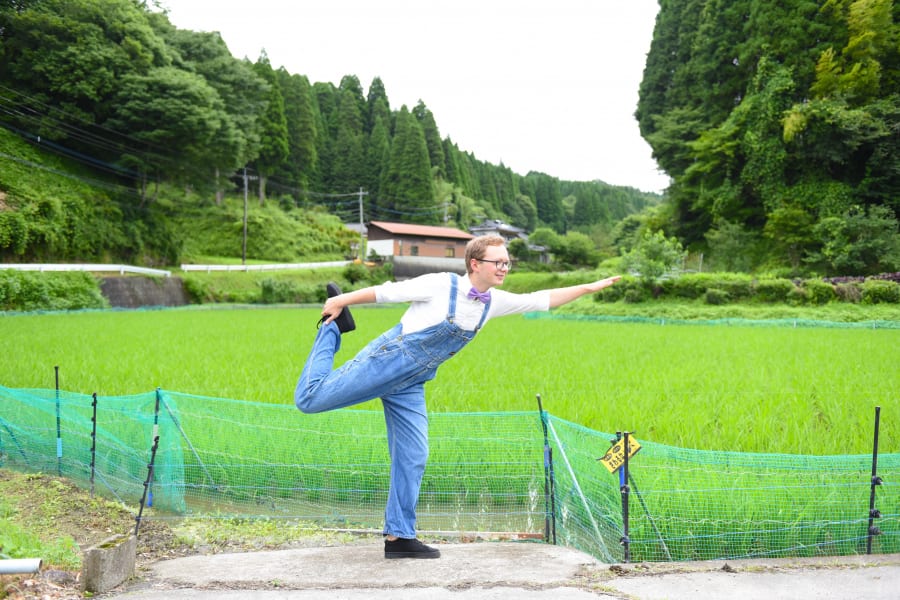 Despite the appearance of “The Westerners”, which is rare in Oguni, many witnessed the appearance of running through the countryside with red mamachari and standing at the cash register at Kiyora Kasa (town product building). (Laughs) Who are you? We asked the person himself to find out what he was. 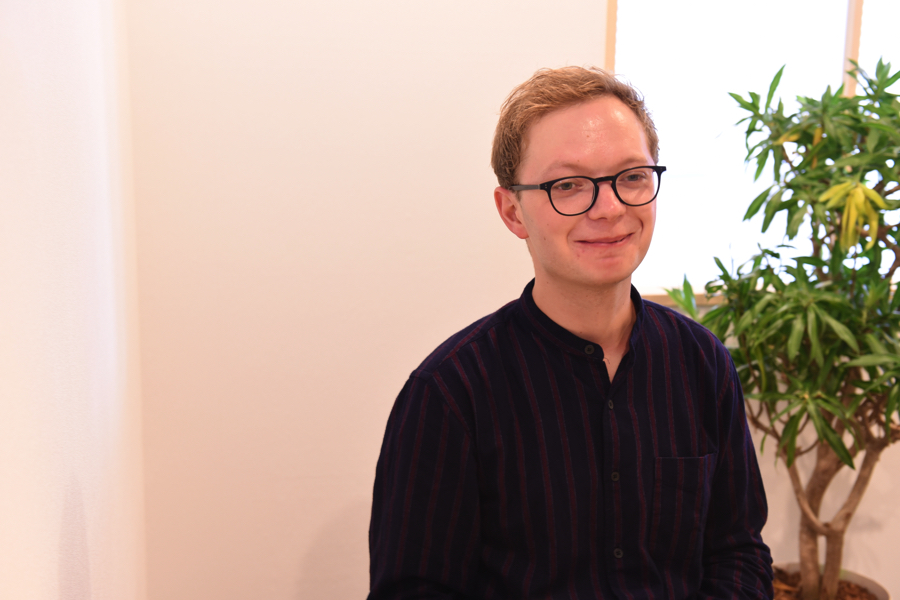 Wall Max Love
Born in 1989. Born in Stockholm, Sweden. After graduating from a local high school, I went to a Japanese language school in Kyoto for 2 years, then returned home and graduated from a local university, Uppsala University, in 2018. To get a job, go to Minamioguni-machi, Aso-gun, Kumamoto Prefecture from 2018 month in 12 year. Currently, he is engaged in inbound tour creation and information dissemination in SMO Minamioguni Co., Ltd. 30 year old Swedish who loves the great nature of Aso, loves to work in the fields and drinks at local pubs. Half of the body is made of locally grown tempura. 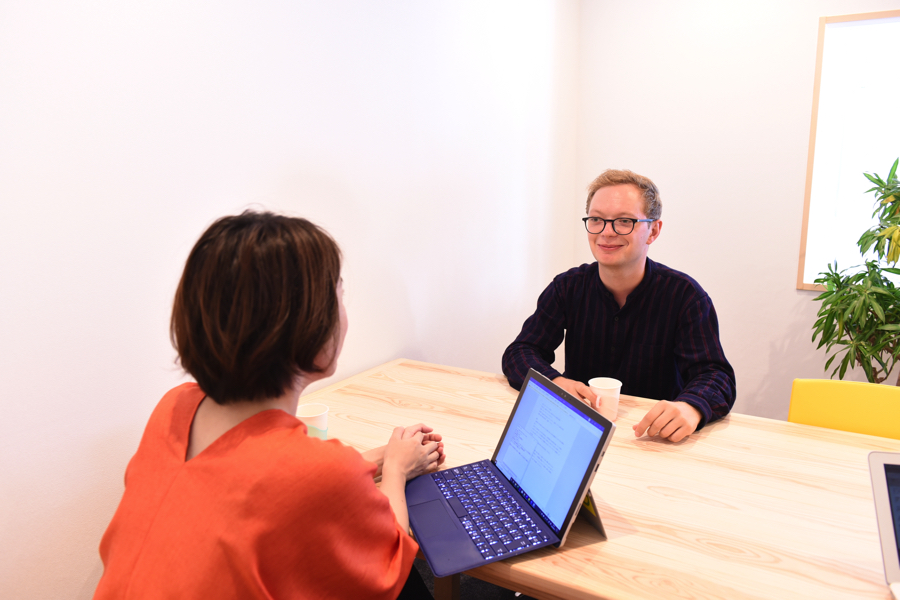 ― In the first place, what was your encounter with Max in Japan?

When I was young, I went to a town with a relative's villa for a long vacation. It's a small town with a population of about 4,000 and as small as Minamioguni, but there is a small bookstore.

One day, when my grandma went to the bookstore and took me with her, there was only one kind of Japanese manga, which happened to be translated into Swedish.

Even now, it is a mystery why I was at a bookstore in such a small town. Lol
To me, “Japan” is a completely unknown world, and honestly, I didn't have any interest, but my grandma says, “I ’ll buy it.” So, “Oh, then, thank you”. I bought it at

If you open the book casually on your way home, you will be attracted more and more.
When I got home, I read all the books, and asked my grandma, "(I want to buy more) and go back to the bookstore again!" Lol 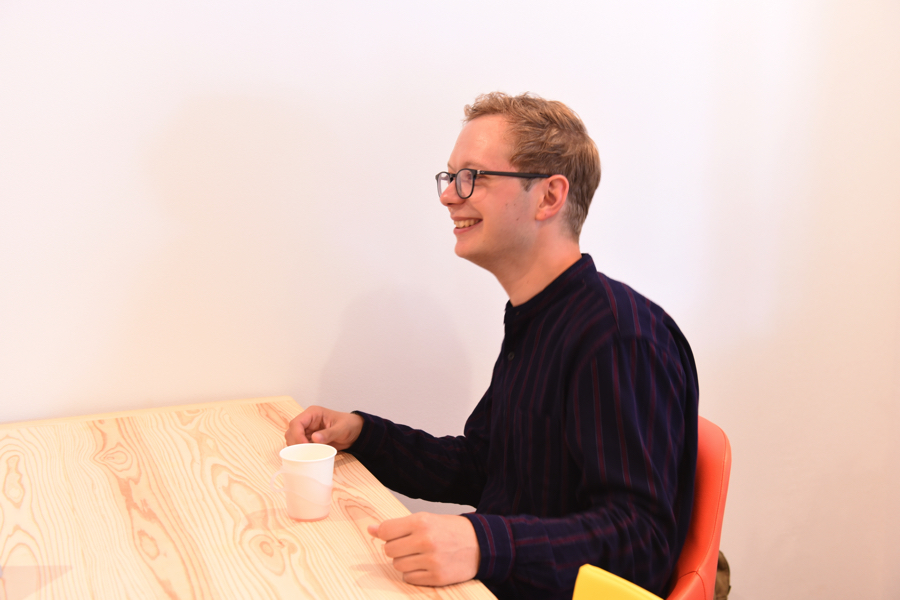 Of course, I was fascinated by the depth of the “long story” that is not a childhood peculiar to Japanese comics, which is not found in Sweden.
“What is this really interesting story!” Anyway, I was so addicted.

At one point, my family decided to travel abroad, but it would be heavy to put many Dragon Ball comics in my baggage, so I recorded my voice reading a dragon ball with a tape recorder. Explain sound effects and pictures. I just listened to it when I was sunbathing on the plane or on the beach.

― You are enjoying the Dragon Ball with your five senses! (Lol)

■ The opportunity to come to Japan

― What kind of youth did you spend after that? 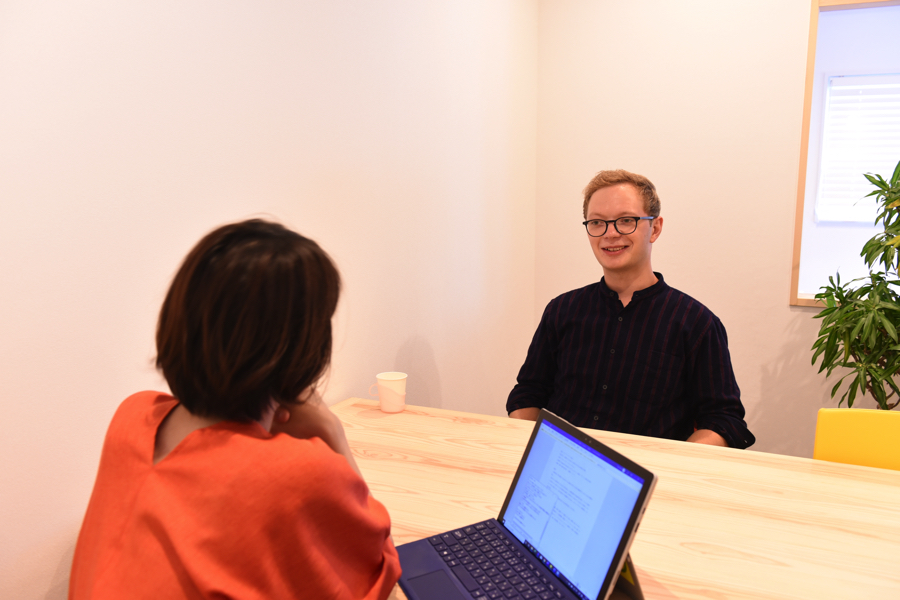 I also looked at various Japanese animations, and I was so eager to speak Japanese that I had a great longing for Japanese.

I thought I had to go to Japan to improve my Japanese, and after graduating from high school, I went to a Japanese language school in Kyoto after earning a lot of bytes and earning money.

― How did you feel about studying abroad for 2 years? 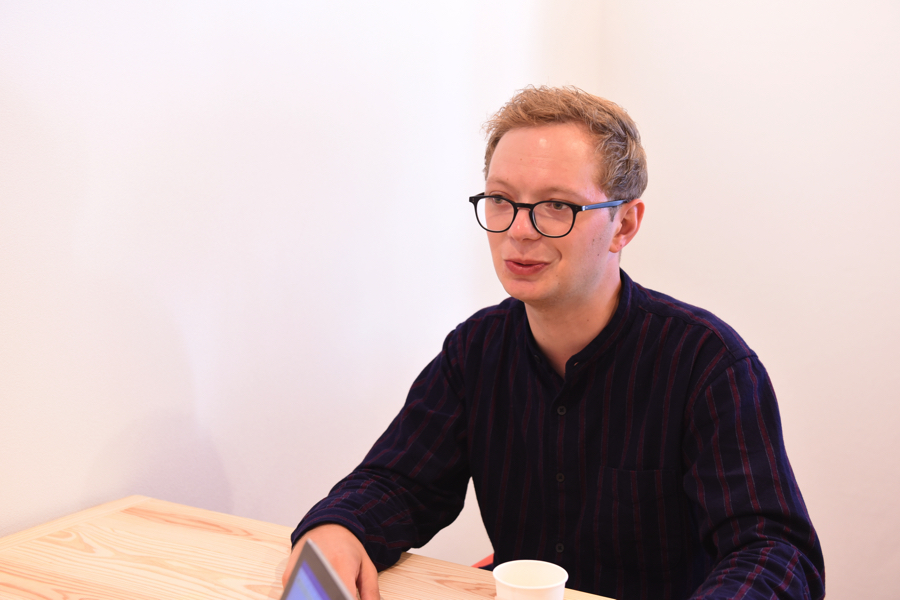 It was a lot of fun.
I asked several seniors from the same school that "Homesick will come after 3 months". Lol
Although it was originally planned for 1, it would have been 2 years.

― It was a really fun international student life! On the other hand, have you ever struggled? 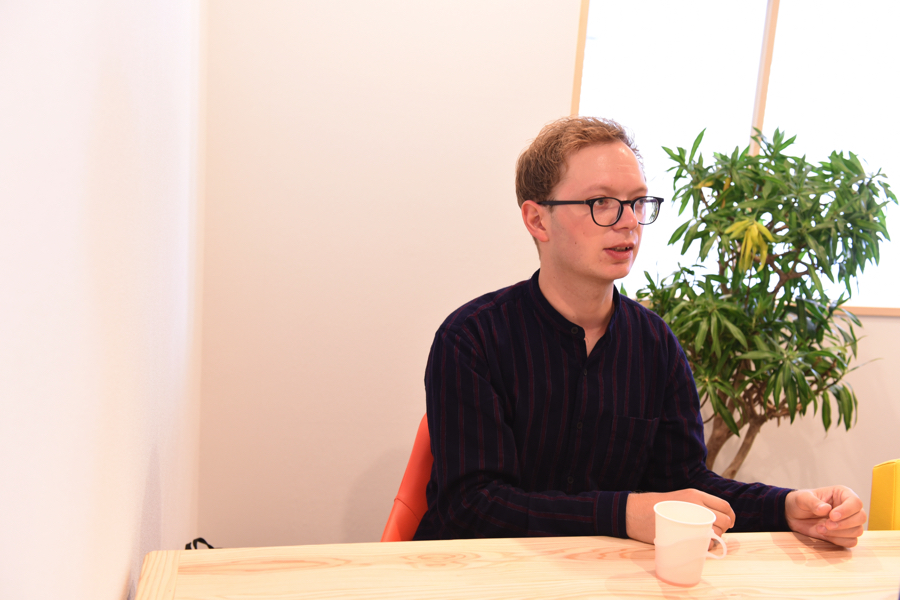 I couldn't improve well just by class, so I wanted to touch raw Japanese, and I participated in an exchange event at a nearby university.

-After studying abroad, you wanted to work in Japan, right? 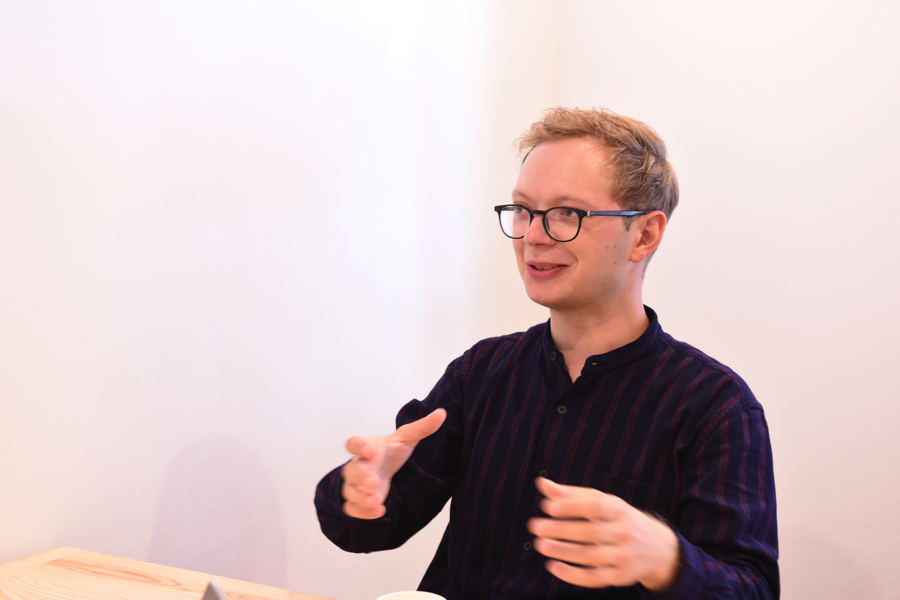 Yes. I wanted to live in Japan all the time.

I thought it would be a different experience to spend half of my time studying and playing as an international student and living in Japan for work, so I wanted to work once.
If you don't try it, you will regret it for a lifetime.
That was one of the big goals in my life.

> Next page: Why in Kyushu and Minamioguni-machi ...?

[Interview] Learn about the real lifestyles of migrants. I came to Oguni Township from Fukuoka and interviewed Minako Yamamoto for the fourth year.
2020/2/4 Future-building base MOG

A must-see for those who want to be active in the area making the most of their powers! We spoke to Mr. Abe who supports the "Minor Small Country Future Project".
2019/5/24 Kaji-chan

[Video Introduction] Limited time only! Thorough dissection of the charm of Yuu Akari, a winter feature of Aso Minamioguni-machi that attracts people!
2020/3/12 Kaji-chan

Hita is hot right now!I went on a pilgrimage to the "Attack on Titan" sacred place in Hita City, Oita! !!